Earlier this year, Elon Musk’s Starlink was already available in 25 countries worldwide. However, earlier this month, the company announced that it has now entered 7 more countries taking the number of countries it is operating to 32. However, this number is now set to increase to 35 as Starlink gets the nod in three more countries. The CEO of Starlink confirmed via a tweet that it now has clearance to operate in Nigeria, Mozambique and the Philippines. Starlink is a satellite Internet service company that provides decent internet accessibility. 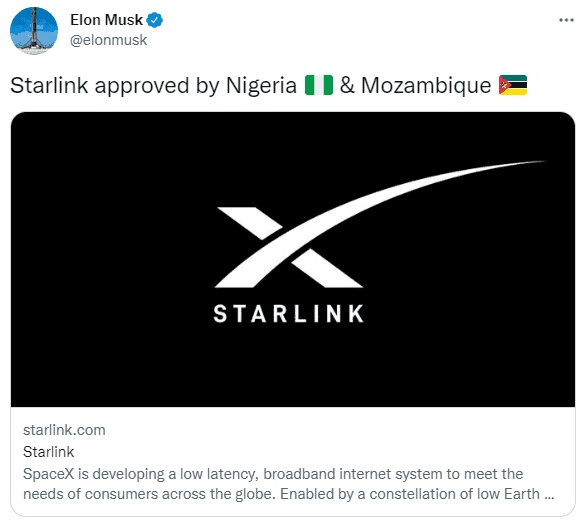 In Nigeria, the Executive Commissioner of the Nigerian Communication Commission (NCC), Ubale Maska representing the Executive Vice-Chairman, NCC, Prof. Umar Danbatta reveals that the country is pursuing healthy competition. The commission promises to ensure that there is room for these new technologies to strive.

Back in May, after a visit to Nigeria by the Starlink team, Maska said: “As the regulator of a highly dynamic sector in Nigeria, the Commission is conscious of the need to ensure that our regulatory actions are anchored on national interest. We have listened to your presentation and we will review it vis-à-vis our regulatory direction of ensuring an effective and sustainable telecoms ecosystem where a licensee’s operational model does not dampen healthy competition among other licensees.” 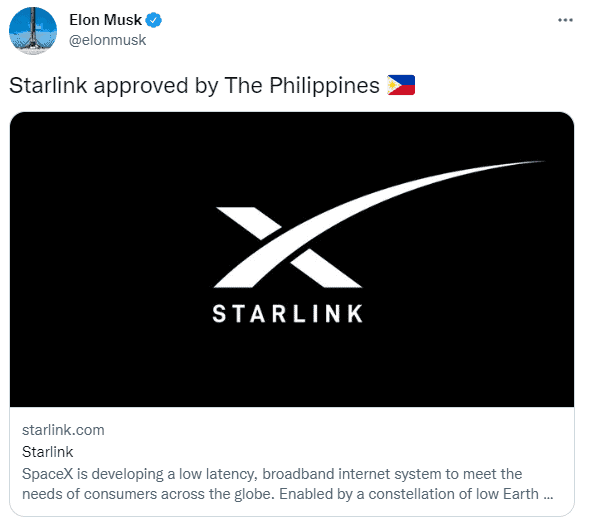 Now, the company has the license to operate in Nigeria. Elon Musk also took to his Twitter handle to announce the feat

The National Telecommunications Commission (NTC) recently confirmed that Starlink Internet Services Philippines Inc can now operate as a provider of value-added services (VAS). Elon Musk’s SpaceX is in charge of Starlinks which has over 1,500 low-Earth-orbit satellites. The Philippines is the first country in South East Asia to use Starlink as a service provider.

The advantage of Starlink is that it defiles the issues of remote or rural areas. Since it uses satellites, once the weather is clear, it doesn’t matter whether you are in a rural or remote village. Starlink offers high-speed, low-latency satellite internet at speeds between 100Mbps and 200Mbps.

While Elon Musk is focusing on other regions, it still has its eyes on India. However, the country with the second-largest smartphone market in the world appears not to be so optimistic. Despite commencing the movement back in 2017, Starlink is yet to get approval to operate in India.

According to NTC Commissioner Gamaliel Cordoba,

The NTC’s swift processing of Starlink’s VAS provider registration is to expedite the service’s immediate roll-out.

The NTC is steadfast in helping to ensure that roll-out of Starlink’s internet access services is fast and professional.