The long wait for the official specs of the Sony PlayStation 5 is finally over. However, what we have are just theoretical specs, the actual performance is still unknown.

The console maker has decided to keep things under wrap probably because a lot of tweaking needs to be done.

It needs to study its closest rival, Xbox Series X and properly time releases. However, the more time Sony takes, the more agitated its fans become.

There are speculations that we do not know much about the PlayStation 5 because things are not moving smoothly.

According to a self-acclaimed video game industry worker, Jeff Rickel, said that the PS5 will have “heating problems to rival the Xbox 360.”

Furthermore, he says that the “…the hardware is failing at an alarming rate and that the system can’t maintain its clocks”.

There is reason to believe that Sony has to redesign the console. This is why we don’t have any official information on what the PlayStation 5 looks like.

At this point, PS fans may just consider Jeff Rickel as a fanboy who badly wants PS5 to fail. Well, there are reasons to believe that he may be one.

According to Kotaku’s Jason Schreier, “the person making these claims has a long history of tweeting about how PlayStation is doomed.” This.

means that we can not really consider Rickel’s words as authentic. It’s, therefore, best to grab his words with a grain of salt.

According to Daniel Rubino of Windows Central he and his colleague have “heard similar things from others too.”

This is not to say that Rickel’s claims are authentic but there could be an interesting twist to the story. The pendulum can actually fall anywhere as things stand presently.

FUD or legit concerns about Sony’s PlayStation 5 having issues?

Anyone following this stuff, talking to game devs and people in-the-know have been hearing similar rumblings for months now. This just summarize it well.

Sony may have overshot (and underestimated) Microsoft. 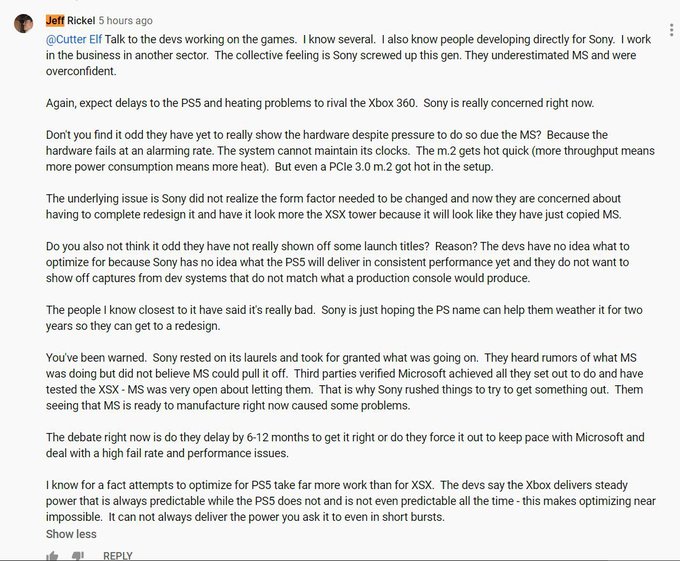 732 people are talking about this

After Sony allowed Microsoft to be ahead in terms of official information, we can’t help but wonder if all is well with the PS5. If the recent leaks are true, then it explains why we have Xbox Series X official images but not that of PlayStation 5.