Skip to content
A few days back, Redmi unveiled its Redmi Note 11T series in China. These devices sit above the overall Redmi Note 11 series and are basically the definitive versions for those who didn’t enjoy the mid-range oriented Redmi Note 11 lineup. The Redmi Note 11T Pro and Redmi Note 11T Pro+ bring compelling specifications such as the MediaTek Dimensity 8100 processor and an affordable price tag. The devices are only available in China, but apparently, are already conquering the domestic market.

According to Redmi General Manager Lu Weibing, the brand managed to sell over 270,000 units in just one hour. Unfortunately, the GM didn’t go into specifics, but we assume he refers to the combined sales of both Redmi Note 11T Pro and Pro+ smartphones. It’s an impressive achievement, and already shows the potential of these devices to be best-sellers. It may also give more reasons for Redmi to bring these devices to other markets in the future. Of course, that will eventually happen, even though they need to go through a rebranding treatment. 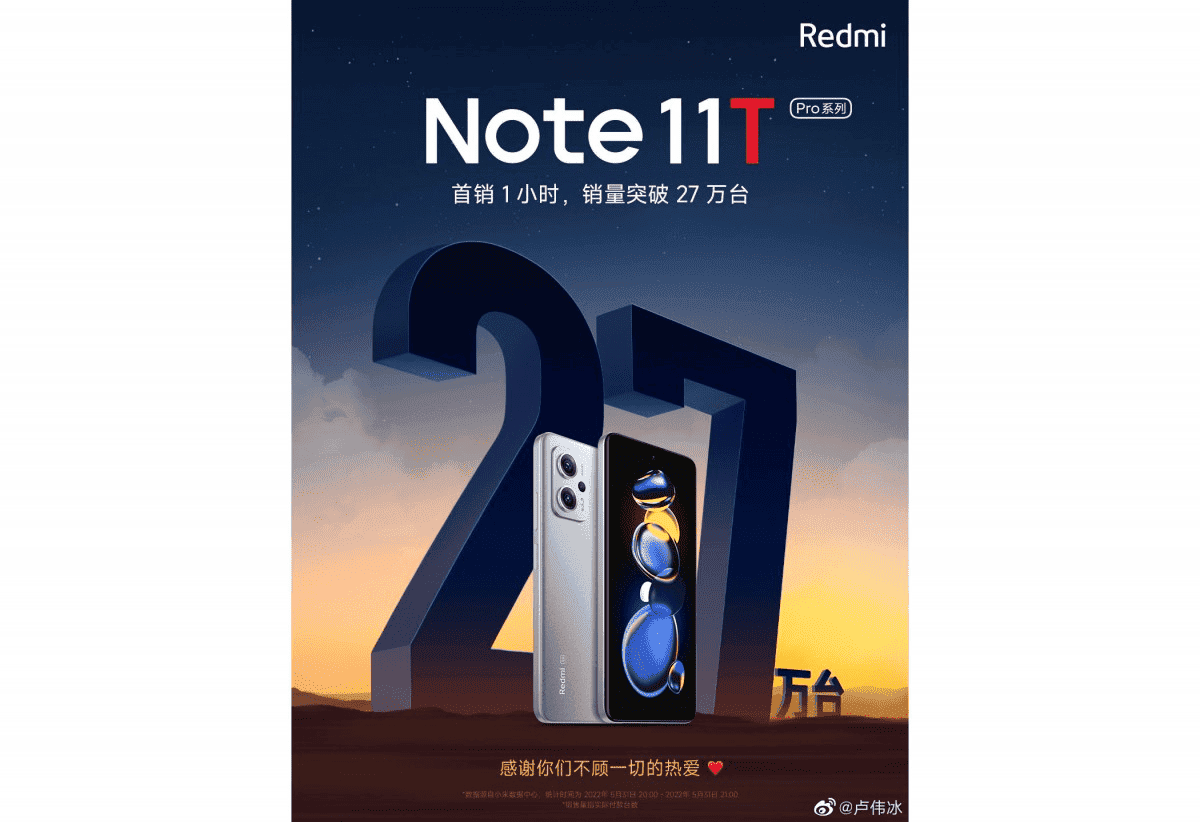 As per the leaks, Redmi will change the name of the Redmi Note 11T Pro+ to Redmi K50i for the Indian market. The “i” is usually associated with the Indian market, so we don’t expect the device to hit other markets with the same name. It will likely carry a different moniker outside of India, and we can even consider a POCO branding. After all, the brand is known for rebranding existing Redmi or Mi smartphones.

The Redmi Note 11T Pro packs a 6.6-inch Full HD+ LCD screen with a 144 Hz refresh rate. This display is said to be very good after all, it’s the first LCD screen to get an A+ score at DisplayMate. Under the hood, the phone carries the MediaTek Dimensity 8100 SoC. It has up to 8 GB of RAM and up to 256 GB of Internal Storage. The device has a triple-camera setup with a 64 MP main, 8 MP ultrawide, and 2 MP macro camera. The phone also brings a 5,080 mAh battery with 67 W fast-charging support.

The Pro+ variant brings up to 512 GB of storage but has a smaller 4,400 mAh battery. The reason is that it brings a faster 120W charging. Apart from this difference, the specifications are basically the same.

Both devices have the potential to be hit across global markets. Especially for those who weren’t happy with the Redmi Note 11 variants.