Skip to content
According to the analytical company Canalys, Samsung continues to maintain its leadership position in the European smartphone market in the first quarter of this year followed by Apple and Xiaomi. They calculated that a third of all delivered smartphones carried the logo of the South Korean giant and the company controls 35% of the mobile device market.

At the same time, experts note that in the first three months of this year, the supply of smartphones to the European market sank by 10% compared to the same period last year. In quantitative terms, this is 41.7 million mobile phones against 46.4 million a year earlier.

Apple came in second with a 21% share and 8.9 million iPhone shipments. The third was Xiaomi, whose devices accounted for 20% of all shipped smartphones. Alas, the first quarter was not the most successful for the company, and it rolled back, losing 3% of its market share.

Realme, on the other hand, was able to significantly increase the supply of its devices, and the growth was 177% compared to the first quarter of last year. Now the company controls 5% of the market share and the number of shipped smartphones was 2.1 million against 0.8 million a year earlier. Closed the top five Oppo with a share of 4%.

Xiaomi smartphones are losing popularity, while Realme is gaining momentum 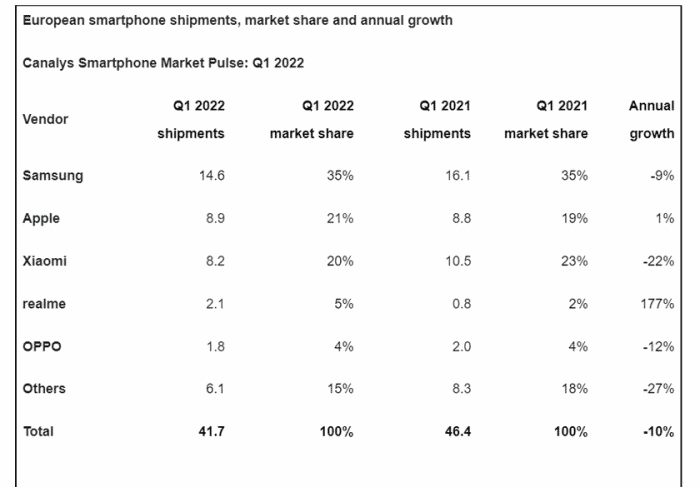 “Most of the decline in Europe was due to Russia and Ukraine being hit hard. Shipments in the countries fell 31% and 51% respectively compared with Q1 2021,” said Canalys Research Analyst Runar Bjørhovde. “Shipments in the rest of Europe only declined 3.5% year on year, showing that demand remains intact. But the ongoing war has driven inflation to a record level and consumer confidence is falling. The real test for the smartphone market will come in the next two quarters; when the economic impact of the war truly starts to be felt.”

“Emerging vendors are accelerating despite the uncertainty,” said Canalys Research Analyst Ayush Shastry. “Supply limitations and varying demand from market to market have provided opportunities; for new names to break in and take share. The focus of realme and vivo on indirect retail and ecommerce channels has borne fruit. As the industry faces many risks, on both the supply and demand sides; improving specific channel partnerships will be key for vendors in the upcoming quarters. Competition within the channel is high, and vendors have a unique opportunity; to help differentiate their channel partners’ offerings and build stronger long-term relationships.”