Most people feel that foldables are too expensive – not that we had any doubt that is still the case, but last week’s poll reaffirms that belief. Unfortunately for the Huawei Mate Xs 2, it’s not only the price that is dissuading people from wanting one, the outward-folding design may have been a bad idea.

A common theme emerged while reading through the comments – €2,000 for a phone with a year old chipset, no 5G and no Google Play Store is too much. The lack of access to parts and services was caused by trade sanctions against Huawei and the situation is unlikely to change soon. 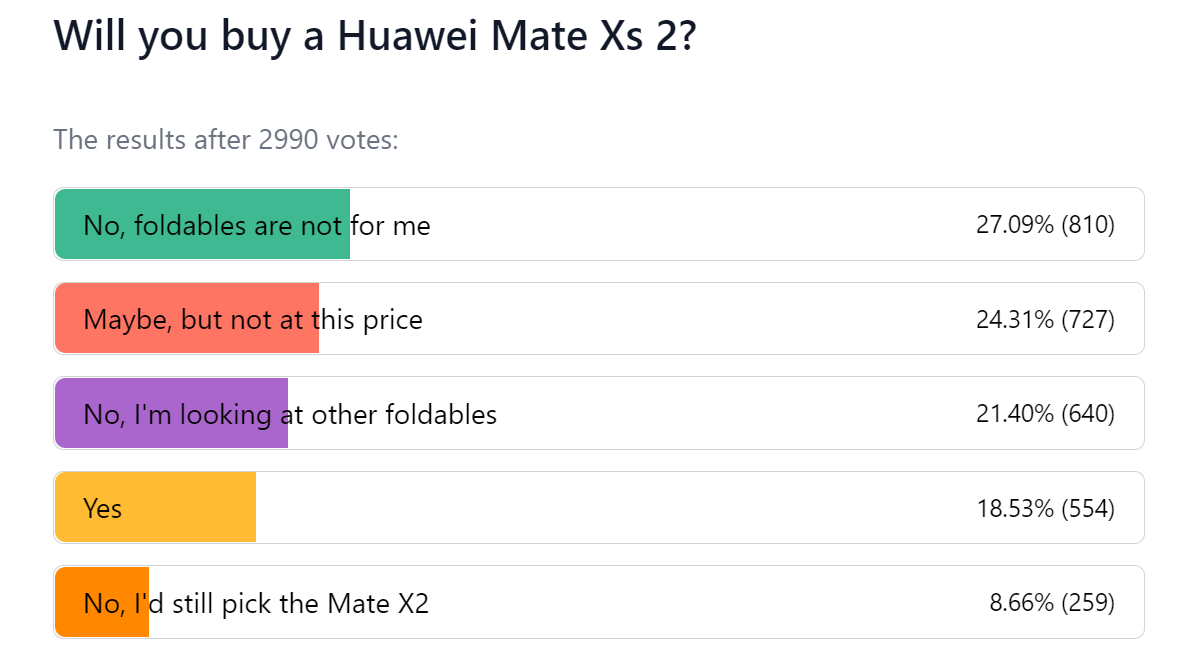 The sanctions had a knock-on effect – they caused sales to decline, which in turn led Leica to end its partnership with Huawei. The two companies produced some of the best mobile cameras over the years, but now they are going their separate ways. And even if Huawei retained the know-how, not having that Leica brand on the back makes the price tag that much harder to swallow.

Those things are outside of Huawei, but this next issue isn’t. The second poll shows that inward folders are strongly preferred and that people are curious about new form factors like rollable displays. The materials and designs used in current foldables just aren’t tough enough to give people the peace of mind that they won’t end up with a €2,000 paperweight.

Overall, most people are not ready to buy a foldable yet, certainly not at this price. And not with this design either. In the end only 1 in 5 voters is interested in picking up the Mate Xs 2.

There is still hope – more people want the Mate Xs 2 than the inward folding Mate X2. Design aside, the X2 suffers from the same issues as the Xs 2, so this is not a huge victory.